Business Owners Delegate, Even After Disaster 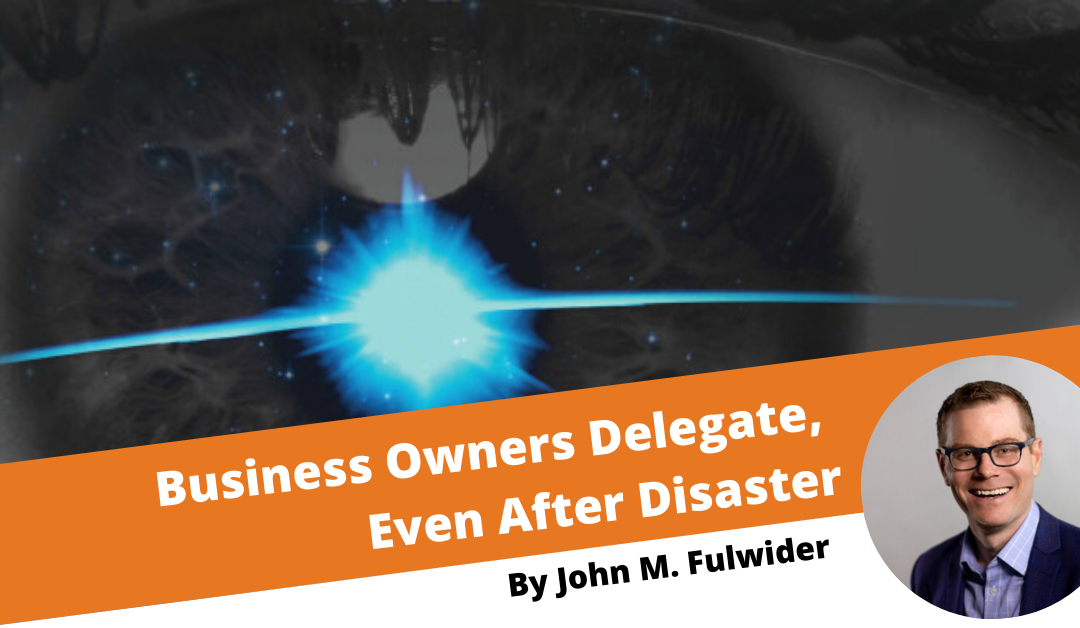 Even after the moon blows up, business owners still need to delegate.

Stick with me here, it’s worth it for a rip-roaring read recommendation and a core principle for your business success.

In Seveneves, the moon blows up in the first sentence. Humanity has about two years to evacuate the planet before a meteorite rain ignites the atmosphere and melts the surface. Humanity survives dodging the moon’s core and other bits big and small, and rebuilds civilization enough to support … wait for it … a bar.

Enter our core business success principle: delegate and elevate. In Seveneves, barkeep Tyuratam Lake calmly polishes a glass as customers pour in all at once:

The ability of the Crow’s Nest to accommodate a socket surge with no intervention from Ty, other than polishing a glass, was, in a sense, his life’s work. He had done every job it was possible to do in this place, from floor mopper on upward, and learned over time to select and delegate the work to others who could do it better.

So Ty has clear roles in mind and has wisely delegated those roles for which he, himself, is not the best fit.

He had advanced, in other words, to higher levels of mental activity while always doing enough of the floor mopping and glass polishing to remain in physical contact with the business of the bar and in human contact with the staff.

Ty had, in other words, developed the Crow’s Nest into a sufficiently healthy and robust organism that it was possible for him to disappear for weeks, sometimes even months, without inflicting serious damage. In some ways, his occasional “vacations” actually did more good than harm, in the sense that when he came back he would commonly find that certain members of the staff had risen to the occasion and become more complete and effective human beings in his absence.

It’s a win-win for Ty and his people: Ty gets full control of his time, and his employees rise to higher fulfillment. Ty delegates; they elevate.

(The above excerpts seem a little out of place for a rip-roaring post-apocalyptic thriller, right? I thought so, too, but trust me: The vast majority of the book moves fast, with only a few departures by author Neal Stephenson into explicit position-taking on societal and business issues.)

Get a Grip on Your Business

It’s almost as if Ty, in the distant post-apocalyptic future, has been reading a business book published before Earth died: Get A Grip: How to Get Everything You Want from Your Entrepreneurial Business by Gino Wickman. It’s not a “we’re all gonna die” disaster novel. But it tells the story of an entrepreneurial dream about to die if the founders don’t do something different, quick. From the synopsis:

Eileen Sharp and Vic Hightower were frustrated. After years of profitable, predictable growth, Swan Services was in a rut. Meetings were called and discussions held, but few decisions were made and even less got done. People were pointing fingers and assigning blame, but nothing happened to solve Swan’s mounting problems. It felt as though they were working harder than ever but with less impact. The company Eileen and Vic had founded and built for 10 years was a different place. It just wasn’t fun anymore.

(Spoiler alert!) Eileen and Vic go on install the Entrepreneurial Operating System, getting the six key parts of their business running like clockwork so they enjoy working there again and Eileen gets to take a real, unplugged vacation. Just like barkeep Ty’s business development work in Seveneves, Eileen and Vic’s work gives them back their time and their enjoyment, and elevates their employees’ career fulfillment as well. Win-win.

The orange wheel right here depicts the Entrepreneurial Operating System, which thousands of business owners in every industry have used to make delegation and elevation possible. (Perhaps even Ty, far in the future!) They realize they’re:

And then, the ones who are open-minded, growth-oriented, and vulnerable self-implement the Entrepreneurial Operating System, or get some outside help implementing it, and they get traction.

So, look at the orange wheel. Which piece seems missing, broken, or flat? That’s where you need to work. (There’s followup help below.)

▶ Listen to Get A Grip: How to Get Everything You Want from Your Entrepreneurial Business by Gino Wickman at 1.5x or 2x speed. Do this while you’re exercising. (Win win!)

▶ Schedule a 90-Minute Meeting with me to evaluate whether the Entrepreneurial Operating System can help you delegate more, and get you everything you want from your business.

▶ If you want another rip-roaring read after you’ve finished Seveneves, try Saturn Run. Popular suspense author John Sandford tries his hand at science fiction, collaborating with a coauthor. Advanced alien technology turns up around Saturn, and it’s a race between China and the United States to get to it first. It reads like a blockbuster movie, which it’ll probably become.